Les Fradkin is a 21st Century "New Media" Artist and Composer / Innovator on the Starr Labs Ztar and a virtuoso MIDI Guitarist. A brand new playing Technique meets 21st Century Ableton Live hi Tech electronics in a Symphonic Rock meets Classical Crossover format for One Man Orchestra. * Pioneer of MIDI Guitar and Tapeless Recording * Original Cast Member of "Beatlemania" * MIDI Guitar Virtuoso * Starr Labs Ztar Virtuoso / One Man Band * Producer & Composer * 500,000 Internet Downloads * 20 Solo CD's * 16 #1 hits at mp3.com * 2004 New Gandy Dancer Album Of The Year * Featured in 20th Century Guitar, Pipeline and NGD Mags * Featured in Time, Newsweek, Us, People and Rolling Stone Les is a successful songwriter/composer from the 1970's, lead guitarist, and one of the original members of the hit Broadway show "Beatlemania". He was a Guitar Synthesizer and Tapeless Recording pioneer of the 1980's, a neoclassical guitar trendsetter in the 1990's and is now a 21st Century innovator as a virtuoso MIDI Guitarist with the Starr Labs Ztar. A classically trained musician as well as being a rock guitarist, he has found success as a recording artist, composer and producer with MGM Sunflower, ESP-Disk, Bell, Arista, RCA, and Laurie Records. Les has written the well known hit "La Chansons Des Souvenirs" ("Song Of A Thousand Voices") for the famous French songstress Mireille Mathieu on the Philips label and this tune has also been recorded in a hit version on RCA Victor (now Sony/BMG) by the Latin Pop icon Roberto Jordan ("Donde"). He was originally discovered and signed by John Hammond Sr. at Columbia back in 1969. He has played Mellotron, 12 and 6-string Guitar, Bass and Piano on dozens of Top 40 hit records throughout the early 1970's , and 1980's, scoring many US and UK chart placings throughout his career. In 1976, Les was selected over thousands of other auditioning guitarists to appear in the original cast of the smash hit Broadway musical "Beatlemania" playing lead guitar and the part of "George Harrison" in New York City, Los Angeles and Chicago along side Paul McCartney lookalike and sound alike Mitch Weissman. Running for two and a half years from May 1977 thru October 1979, every show (including over 1000 in New York alone) was sold out and the Beatlemania musicians quickly became celebrities with magazine cover stories ("Newsweek","Time", "People", "Rolling Stone") and many major television show appearances. With his guitar-playing in the international spotlight from the show, Fradkin developed a cult following that has avidly followed his career and made him a celebrity among guitar fans. In the 1980's, he pioneered the introduction of tapeless MIDI recording and MIDI Guitar, scoring many national jingles and TV film music with Score Productions, ABC-TV and NBC-TV, including a 4 year stint composing and programming for the Soap Opera "One Life To Live". He continues to be one of the foremost virtuosos of MIDI Guitar in the world today. Les has incorporated the Starr Labs Ztar, a very advanced and High Tech MIDI Guitar, into his arsenal of instruments, and Les' unique approach with this new technology has seen release with "Guitar Revolution" and "Ticket To A Remix Universe" (Beatles covers), "If Your Memory Serves You Well" (an Orchestrated CD of Bob Dylan Covers), "One Link Between Them" featuring his acclaimed Instrumental composition, "Lift Off" and, most auspiciously, has yielded a Chart Classical/Progressive rock placing for his CD "Baroque Rocks!" , featuring "Canon In D", which placed #13 in the Amazon Classical Charts and #9 in the Japanese Progressive rock Amazon Charts in 2009. His current instrumental music, is a mixture of various influences and signposts from Rock, Guitar Instrumental, Electronic, Progressive and Classical music. 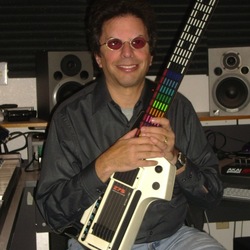 Has Studied Instrument For:
49 years